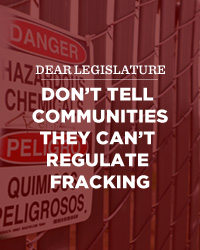 Big Oil is at it again. Their allies in the legislature are trying to ban small towns, cities and counties from either regulating or banning fracking.

Take action and tell the Florida Legislature to reject HB 191 and SB 318. Communities should be able to protect their land and water from fracking.

Hydraulic fracturing, commonly referred to as fracking, is the use of sand, water, and chemicals, injected at incredibly high pressures, to blast open rock deep beneath the surface of the earth to release trapped oil and gas. This process is devastating communities across the country, and the oil and gas industry has its sights set on Florida, particularly fields in the panhandle and in the Everglades.

Together, we’ve helped stop legislation that would deny the public's right to know the details of the chemical mix that is pumped into the ground during the fracking process for two years in a row. Nonetheless, Big Oil isn’t going to give up so easily. This year’s bills to deny local communities the ability to ban or regulate fracking would not only stop proposed local efforts going forward, but be retroactive and eliminate bans and regulations already in place.

Tell the Florida Legislature that communities should be able to ban or regulate fracking and to vote no on HB 191 and SB 318.

Regardless of anyone’s particular views on the needs or dangers of fracking, everyone should agree that local communities have the right to make their own decisions about strengthening water protections. Cities and counties shouldn’t be prevented from protecting their citizens from fracking as they see fit.