Rick Scott just blocked early voting at UF. Here's what you can do.

When the City of Gainesville requested it use the Reitz Student Union on the University of Florida campus as an early voting location, Scott's hand-picked elections chief Ken Detzner said "no." This is a very clear and obvious attack on the voting rights of Florida's young people. Right now, we need to flood Gov. Scott's office with phone calls. Click here to get his number and report back what you hear.

For more information check out this story in the Tampa Bay Times and the email alert we sent out earlier today: 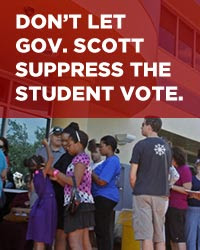 Gov. Rick Scott has been doing everything in his power to make it harder for certain Floridians to vote ever since he got into office. In 2012, Florida was once again a national laughing stock with hours long lines thanks to Scott radically curtailing early voting. But news out of Gainesville yesterday marks a new low.

Scott has blocked early voting at the University of Florida, a not so subtle move to keep young voters from exercising their most fundamental right in a democracy.

When the City of Gainesville requested permission from the state to use the University of Florida’s Reitz Student Union as an early voting location for upcoming municipal elections, Scott’s handpicked Secretary of State Ken Detzner said “no.”1

Send Rick Scott a message today and tell him we won’t stand for this latest scheme to keep Florida voters from the polls.  Click here to contact the governor’s office and demand that UF students be allowed to vote early at their student union.

This cannot stand.  If Scott gets away with this attack on Florida voters he’ll only be more emboldened to restrict voting when his own name is on the ballot this November.

This is a new low even for Rick Scott. What possible justification could our governor have for trying to keep students from exercising their civic duty to vote? What is he afraid of?

"I'm very upset about this … I just can't understand why they feel the need to be so restrictive about where people are allowed to vote,” said Lori Edwards, President of the Florida Association of Elections Supervisors.1

Deirdre Macnab, president of the League of Women Voters, called it:

“jaw dropping to consider that we wouldn't open up the student union, the student library and other buildings on campus to make it easier for our leaders of tomorrow to start their civic duty of voting. One can only be left with the impression that the Florida Legislature, Governor and Secretary of State would frankly prefer to discourage student participation.”1

Send Rick Scott a message today and tell him we won’t stand for this latest scheme to keep Florida voters from the polls. Click here to contact the governor’s office and demand that UF students be allowed to vote early at their student union.

Taking access to voting away from students is unacceptable. Join us in taking a stand for our fundamental right to vote.

For a better Florida,

Mark and the Progress Florida team

P.S. – The more people that know about this attack on young voters and democracy the more likely we are to reverse it.  Please forward this alert to your friends and other Floridians who care about protecting our right to vote.